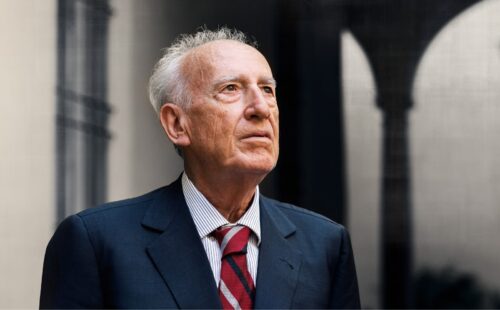 Celebrated for music-making of matchless sophistication, unshakeable concentration and adamantine integrity, Maurizio Pollini occupies a special place among the ranks of today’s great pianists.  Pollini’s nobility of expression and total technical command of the keyboard combine to create interpretations that reveal profound insight into works from past and present.

After appearances at the Salzburg, Stresa and Lucerne festivals last summer, Pollini opened the 2019–20 season with a performance for an invited audience of Beethoven’s final three piano sonatas (Op.109–111) at Munich’s Herkulessaal; this special event marked the launch of Deutsche Grammophon’s Beethoven 2020 campaign. Forthcoming highlights include solo recitals in Lugano, Bari, Milan (all February 2020) and Hamburg (March); performances of Mozart’s Piano Concertos Nos.14 and 27 with the Wiener Philharmoniker and Riccardo Muti at the Vienna Musikverein; and further recital appearances at the Kennedy Center, Carnegie Hall and Chicago’s Symphony Center (May).

Pollini caused a sensation in 1972 with the release of his first studio album for Deutsche Grammophon. His recording of Stravinsky’s Trois mouvements de Petrouchka and Prokofiev’s Seventh Piano Sonata set new standards for the performance of contemporary music; it also signaled his intention to explore wide repertoire horizons. He has since remained an exclusive DG artist and created a discography of remarkable depth and breadth, embracing everything from the complete piano sonatas of Beethoven and much of Chopin’s output to works by Boulez, Nono, Schoenberg and Webern.

His latest album sees him revisiting Beethoven’s Piano Sonatas, op.109–111 – the composer’s final three works in the genre that he took to unprecedented heights. Pollini’s mature interpretations of works he first recorded more than 40 years ago will be released in February 2020. January 2019 saw the release of Maurizio Pollini – Chopin, featuring the Nocturnes Op.55, Mazurkas Op.56, Berceuse Op.57 and Piano Sonata in B minor Op.58, all written in 1843 or 1844. The yellow label marked the pianist’s 75th birthday with the release in October 2016 of Maurizio Pollini – Complete Recordings on Deutsche Grammophon, a special edition comprising 55 CDs and 3 DVDs. Other recent releases include a centenary tribute to Debussy – the complete second book of Préludes and a performance with his son Daniele of En blanc et noir for two pianos (February 2018); an earlier album of Chopin’s late works (January 2017); and the final title in Pollini’s original complete cycle of the Beethoven piano sonatas (November 2014), the culmination of a critically acclaimed project launched in 1977 with a Gramophone Award-winning account of the late sonatas.

Pollini’s recording of Chopin’s Nocturnes won the “Best Instrumental Soloist Performance (Without Orchestra)” category at the 2006 Grammy Awards. His long list of prestigious recording prizes and awards includes the 2001 Diapason d’Or for Beethoven’s Diabelli Variations and membership of Gramophone’s “Hall of Fame” (2012), while further honors include the Ernst von Siemens Music Prize (1996), the Premium Imperiale (2010) and the Royal Philharmonic Society’s Instrumentalist Award (2011).

The literary critic and cultural commentator Edward Said observed that “such complete satisfaction as offered by Pollini’s consummately undemonstrative but unpretentious performances is very rarely found”. That satisfaction flows not least from the pianist’s ability to conjure an infinite variety of tonal shades and inflections from the keyboard. Pollini regards the piano as a “neutral” instrument that can be transformed into a vehicle for limitless expression. “To see how this instrument reacts and yields to whatever you want to do … is something quite extraordinary,” he observed in 2014. “This is why I am still so happy to be a pianist.”

While Maurizio Pollini is synonymous with the works of Beethoven, Chopin, Schumann and Brahms, his repertoire choices have ranged widely to include everything from Bach and Mozart to Debussy, Bartók and beyond. He has championed music by contemporary composers throughout his career, regularly performing works by Pierre Boulez, Luigi Nono and Karlheinz Stockhausen in recitals at the world’s leading concert halls. Pollini’s pianism draws inspiration above all from the abiding love he holds for each work he performs. As he told filmmaker Bruno Monsaingeon in the 2014 documentary profile De main de maître (released on DVD by DG in 2015), “My decision to include a piece in my repertoire is based on the absolute certainty that I will never grow weary of the works I’ve selected.”

Programmes comprising contemporary music and works from the Classical and Romantic mainstream gave life to the pianist’s Progetto Pollini, which he launched at the 1995 Salzburg Festival. He expanded the project over the next decade with Pollini Perspectives, a series of recitals complete with new commissions and repertoire landmarks presented to audiences worldwide. Pollini’s interpretations have continued to evolve and deepen since then: following a recital of works by Brahms, Schumann and Chopin at Carnegie Hall in April 2019, for example, the New Yorker praised his “new approach to performance that … became the source of a new set of musical revelations” and enabled him to deliver “intellectual and aural shocks from the very first notes that he played”.

Maurizio Pollini was born in Milan in January 1942. Art and music formed a natural part of his childhood. His father, an able violinist, was one of the first modernist architects in Italy, while his mother was a trained pianist and singer. His uncle, Fausto Melotti, was a leading Italian sculptor, a pioneer of abstract art and a keen amateur pianist. Maurizio was five when he started playing piano – having received his first lessons from Carlo Lonati, he gave his first public performance at the age of nine and returned to the concert platform several times over the next few years.

Spurred on by his second teacher, Carlo Vidusso, Pollini gave a remarkable recital of Chopin’s Études in Milan in 1956. The practical experience of learning these fiendishly difficult pieces set the foundations for the teenage pianist’s immaculate technique. Four years later, at the age of eighteen, he attracted worldwide attention as winner of the Sixth International Chopin Competition in Warsaw. While victory effectively launched his international career, he felt unready for its demands and chose to withdraw from public performance for almost two years. He studied with the legendary Arturo Benedetti Michelangeli and also immersed himself in the music of Beethoven, Schumann and Brahms.

“Today I find being labeled as a Chopin player is a great honour,” Pollini recalls. “But then … I wanted to be involved in many other musical experiences.” He realized his ambition after returning to the concert scene later in the 1960s, when he astonished audiences and critics with the maturity and quality of his pianism. He forged a close lifelong partnership with his friend Claudio Abbado and developed further significant artistic relationships with, among others, Pierre Boulez and Luigi Nono. The latter composed two works for Pollini, including a piece for piano, solo soprano, orchestra and tape written in memory of a Chilean revolutionary leader.

During the late 1960s and 1970s, inspired by left-wing politics and a personal belief in the arts as an engine for social change, Pollini took part in concerts for students and workers presented at La Scala, Milan, and throughout Italy. “Art itself, if it is really great, has a progressive aspect that is needed by a society, even if it seems absolutely useless in strictly practical terms,” he told the Guardian in 2011. “In a way art is a little like the dreams of a society. They seem to contribute little, but sleeping and dreaming are vitally important in that a human couldn’t live without them, in the same way a society cannot live without art.” 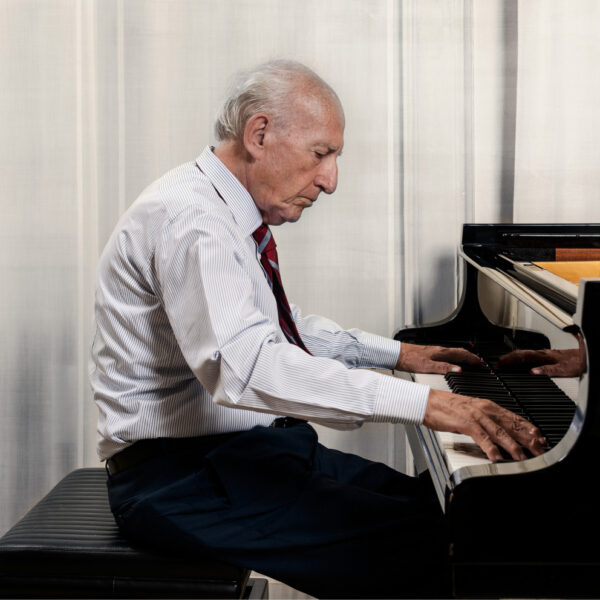 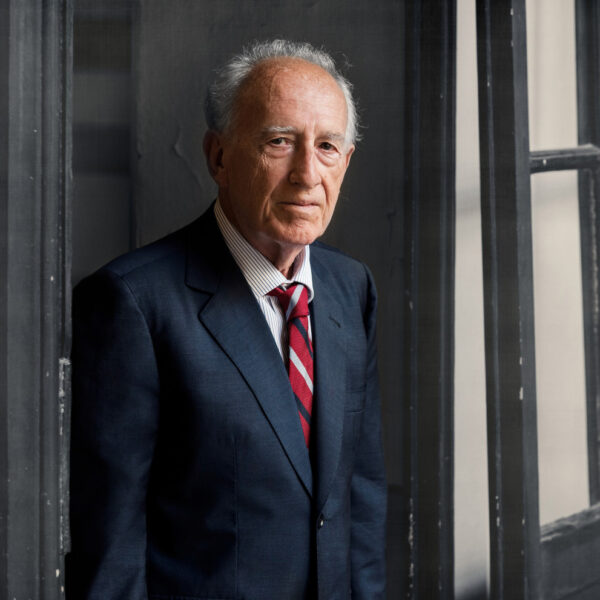 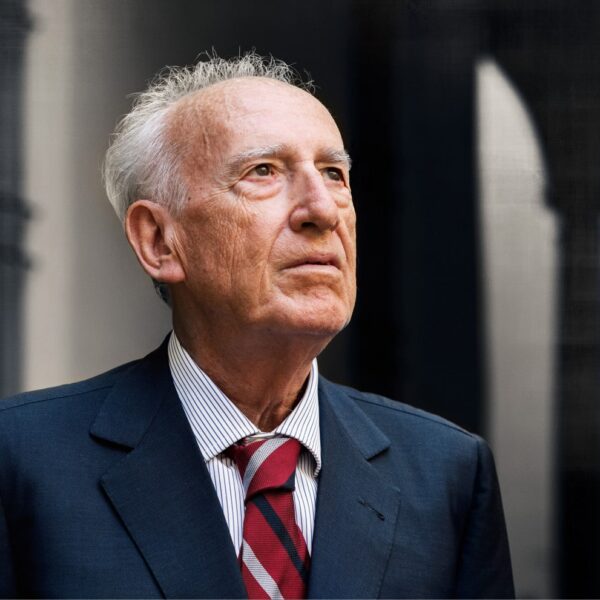