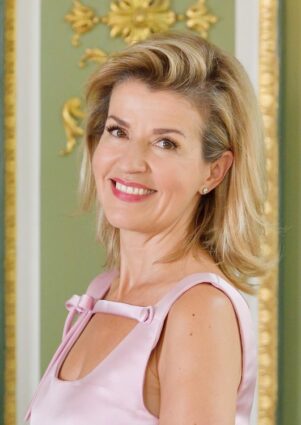 Anne-Sophie Mutter is a musical phenomenon: for more than 40 years the virtuoso has now been a fixture in all the world’s major concert halls, making her mark on the classical music scene as a soloist, mentor and visionary.

The four-time Grammy® Award winner is equally committed to the performance of traditional composers as to the future of music: so far she has given world premieres of 28 works – Unsuk Chin, Sebastian Currier, Henri Dutilleux, Sofia Gubaidulina, Witold Lutoslawski, Norbert Moret, Krzysztof Penderecki, Sir André Previn, Wolfgang Rihm, Jörg Widmann and John Williams have all composed for Anne-Sophie Mutter. Furthermore, she dedicates herself to numerous benefit projects and to supporting tomorrow’s musical elite.

Anne-Sophie Mutter’s 2020 concert calendar features performances in Asia, Europe and North America, once again reflecting the violinist’s musical versatility and her unparalleled prominence in the world of classical music.

As part of the Beethoven Year, the violinist spotlights works which make Beethoven immortal. She performs four different programmes: apart from the Beethoven Violin Concerto, which she combines with the Violin Romances, the Triple Concerto and the Violin Romance No. 2 in F-major Op. 50 form another focus. Another Beethoven programme consists of the Violin Sonatas No. 4in A-minor Op. 23, No. 5 in F-major Op. 24 (“Spring Sonata”) and No. 9 in A-major Op. 47 (“Kreutzer Sonata”). The fourth programme in the anniversary year includes the String Trio in C-minor Op. 9 and the String Quartet in E-flat-major Op. 74 (“Harp Quartet”) – in these concerts, the bridge from the avant-gardist of the 1790s to our present times is built by Jörg Widmann, whose new string quartet Studie über Beethoven Anne-Sophie Mutter commissioned; the work is dedicated to her and had its world premiere in Tokyo on February 22, 2020.

Anne-Sophie Mutter began the year 2020 on January 5 by playing the Adagio from Johann Sebastian Bach’s Concerto for Violin, Strings and Basso continuo in E-major BWV 1042: the Vienna Philharmonic celebrated the 150-year anniversary of the Musikverein building – the anniversary concert has been conducted by Semyon Bychkov.

On January 18 and 19, the “Across the Stars” programme could be heard live for the first time in Europe with John Williams on the podium: in Vienna, the multiple Oscar-winner conducted some of his most outstanding works. During the concert with the Vienna Philharmonic, pieces from Star Wars, Schindler’s List, The Geisha, Harry Potter, Dracula and Munich have been performed. Most of these compositions have been re-arranged by Williams for Anne-Sophie Mutter as part of the “Across the Stars” project. The CD recording of this new repertoire, previously unheard in this constellation, was released in August 2019.

On January 21, Mutter embarked upon her 2020 Beethoven anniversary concerts in the USA, giving several recitals with Lambert Orkis. The concerts with Violin Sonatas Nos. 4, 5 and 9 took these two musicians, who are known to harmonize perfectly with one another, into the 32nd year of their artistic collaboration. Their recital programme for the Beethoven jubilee sees Anne-Sophie Mutter and Lambert Orkis perform in China, Germany, Great Britain, Japan, Austria, Taiwan and the USA. The recording of Beethoven’s Sonatas for Piano and Violin by Anne-Sophie Mutter and Lambert Orkis won a Grammy Award in 2000, among other distinctions. The silver jubilee of these two exceptional artists was celebrated in 2014 with the release of a double CD with samples from their comprehensive repertoire.

Together with six current and former scholarship recipients of her foundation (Ye-Eun Choi, Vladimir Babeshko, Pablo Ferrández, Wei Lu, Daniel Müller-Schott and Kian Soltani), who now have their own international careers with concert performances worldwide, Anne-Sophie Mutter forms various ensembles to perform Beethoven’s String Trios in C-minor Op. 9 and in E-flat-major Op. 3, the String Quartet in E-flat-major Op. 74 (“Harp Quartet”) as well as Jörg Widmann’s Studie über Beethoven. After its premiere in Tokyo on February 22, 2020, this programme will also be presented in China, Germany, Japan, Austria, Spain and in the USA.

Mutter plays the Beethoven Violin Concerto for the first time during the anniversary year in Tokyo on February 20: at the “Night of Concerto”, Cristian Măcelaru conducts the New Japan Philharmonic; after this milestone of the violin repertoire, the violinist also plays the Triple Concerto with Daniel Müller-Schott (cello) and Lambert Orkis (piano). These two Beethoven programmes will also be performed by Mutter in Asia and Europe as well as North America.

In September 2008 her recording of Gubaidulina’s Violin Concerto In tempus praesens as well as the Bach Violin Concerti in A-Minor and E-Major was released.

During the Mendelssohn anniversary year of 2009, Anne-Sophie Mutter paid very personal homage to the composer, uniting solo concerto repertoire and chamber music on CD and DVD: the Violin Sonata in F-Major written in 1838, the Piano Trio in D-Minor completed a year later, and the Violin Concerto in E-Minor of 1845.

For her 35-year stage anniversary in 2011, Deutsche Grammophon released a comprehensive box set with all of the artist’s DG recordings, extensive documentary material and as-yet unpublished rarities. At the same time, an album of first recordings of pieces dedicated to the violinist by Wolfgang Rihm, Sebastian Currier and Krzysztof Penderecki appeared.

In October 2013 Anne-Sophie Mutter presented her first recording of the Dvořák Violin Concerto with conductor Manfred Honeck and the Berlin Philharmonic.

In May 2014 a double CD with recordings by Mutter and Orkis followed, commemorating the 25th anniversary of their collaboration: The Silver Album featuring the first recordings of Penderecki’s La Follia and Previn’s Violin Sonata No. 2.

The live recording Anne-Sophie Mutter – Live from Yellow Lounge of her club performance in Berlin was released on CD, vinyl, DVD and Blu-ray disc in 2015. This was the first live recording ever from a Yellow Lounge. On the podium at Neue Heimat Berlin, Anne-Sophie Mutter was joined by her long-standing piano accompanist Lambert Orkis, “Mutter’s Virtuosi” and the harpsichordist Mahan Esfahani. The programme covered three centuries of classical music – from Johann Sebastian Bach and Antonio Vivaldi to George Gershwin and John Williams – a combination chosen especially by Anne-Sophie Mutter for the club evenings.

Commemorating the 40-year stage anniversary of the charismatic artist, Deutsche Grammophon assembled the double CD Mutterissimo – The Art of Anne-Sophie Mutter, released in 2016. It assembles the highlights of her multi-faceted discography – personally selected by Anne-Sophie Mutter herself and focusing primarily on the past two decades of her impressive career.

In November 2017, Anne-Sophie Mutter and Daniil Trifonov released their first joint album, focusing on one of the most famous work in all the classical repertoire. Together with Hwayoon Lee, Maximilian Hornung and Roman Patkoló, they recorded Schubert’s Piano Quintet in A-major, generally known as the “Trout Quintet”. The programme also included Schubert’s Notturno, a masterful late work for violin, cello and piano, as well as his songs Ständchen and Ave Maria, arranged for violin and piano.

Krzysztof Penderecki’s 85th birthday was honoured by Deutsche Grammophon in 2018 with a double album including all the works he has dedicated to Anne-Sophie Mutter, including her first recording of the Sonata for Violin and Piano No. 2: a sensitive and touching homage by the violinist to her musical friend and companion.

In 2018, Deutsche Grammophon also commemorated the 40-year anniversary of Anne-Sophie Mutter’s first recording by re-releasing her earliest concerto recordings in a deluxe hardcover edition entitled The Early Years – featuring violin concerti by Mozart (Nos. 3 and 5), Beethoven, Bruch and Mendelssohn. Thanks to the new, high-resolution audio format 2.2 24bit/192kHz, the listener has the impression of being in the violinist’s immediate vicinity.

In August 2019, Across the Stars, her album with some of the most brilliant works by the composer and multiple Oscar-winner John Williams, was released, for which Williams adapted most of the recorded works especially for her.

Anne-Sophie Mutter, Yo-Yo Ma and Daniel Barenboim celebrate the 250th anniversary of Beethoven’s birth by recording the Triple Concerto. Pairing the Concerto with the Seventh Symphony, the new Deutsche Grammophon album also marks the 20th birthday of the West-Eastern Divan Orchestra. The Album has been released on 8 May 2020, 40 years after the appearance of legendary Triple Concerto recording made by Mutter and Ma under Herbert von Karajan.

This was followed in August 2020 by John Williams in Vienna: the legendary American film composer conducted the Vienna Philharmonic for the first time in January 2020; the recording documents this historical performance of milestones of film history. At the Musikverein, Anne-Sophie Mutter played a selection of the virtuoso adaptations Williams wrote especially for her, including “Hedwig’s Theme” from “Harry Potter”, “Devil’s Dance” from “The Witches of Eastwick” and the theme from “Sabrina”.

Anne-Sophie Mutter also takes a keen interest in alleviating medical and social problems of our times. She supports various causes through regular benefit concerts. Thus, in 2019 she played for projects of Save the Children in Yemen. In 2020 she will give three benefit concerts: one for the London-based organization “Crisis” which is dedicated to helping homeless persons, one for the foundation „Leipzig helps Children“ and one for the Beethoven-Haus in Bonn.

On October 16, 2019, Anne-Sophie Mutter was honoured to receive the Praemium Imperiale in the music category; in June she received the Polar Music Prize. Poland awarded the Gloria Artis Gold Medal for Cultural Achievements to Anne-Sophie Mutter in March 2018, making her the first German artist to receive such an honour. In February 2018 she was named an Honorary Member of the Accademia Nazionale di Santa Cecilia. Romania awarded the Order of Cultural Merit in the rank of a Grand Officer to Anne-Sophie Mutter in November 2017; during the same month France honoured her by presenting her with the insignia of a Commander of the French Order of the Arts and Literature. In December 2016, the Spanish Ministry of Education, Culture and Sports awarded her the “Medalla de oro al Mérito en las Bellas Artes” (Gold Medal for Merits in the Fine Arts). In January 2015 Anne-Sophie Mutter was named an Honorary Fellow of Keble College at the University of Oxford. In October 2013 she became a Foreign Honorary Member of the American Academy of Arts and Sciences, after winning the medal of the Lutoslawski Society (Warsaw) in January. In 2012 the Atlantic Council bestowed the Distinguished Artistic Leadership Award upon her. In 2011 she received the Brahms Prize as well as the Erich Fromm Prize and the Gustav Adolf Prize for her social activism. In 2010 the Technical-Scientific University of Norway in Trondheim bestowed an honorary doctorate upon her; in 2009 she won the European St. Ulrich Award as well as the Cristobal Gabarron Award. In 2008 Anne-Sophie Mutter was the recipient of the International Ernst von Siemens Music Prize as well as the Leipzig Mendelssohn Prize. 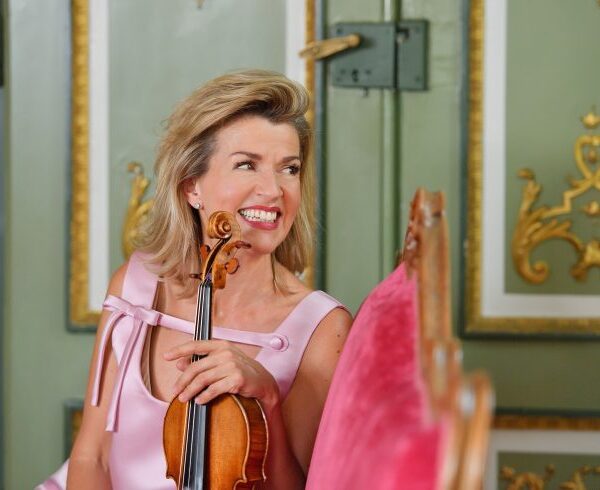 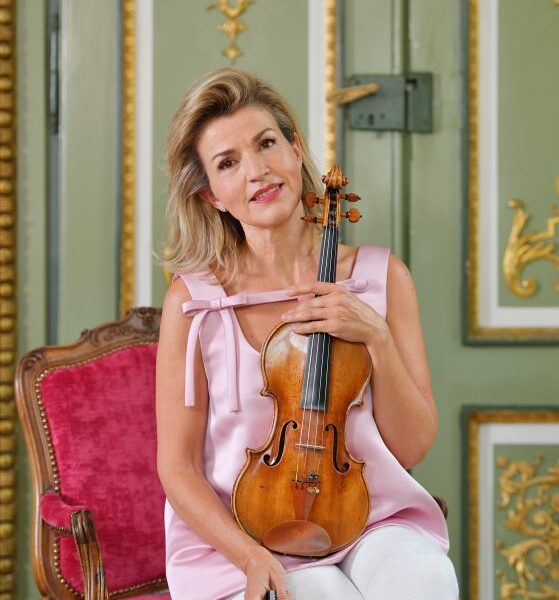 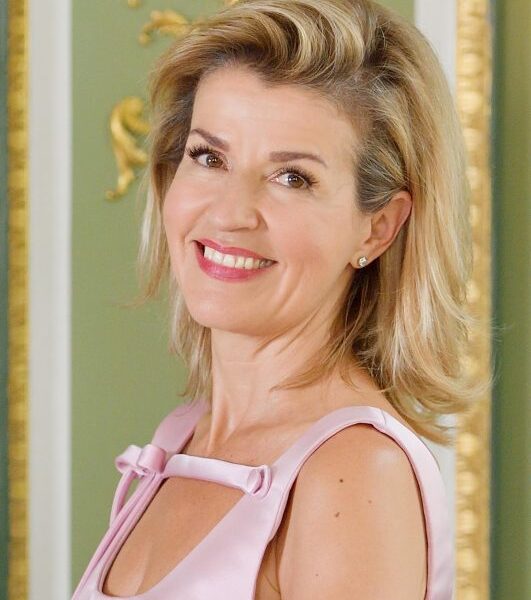 “The stellar performance of the evening was however Anne-Sophie Mutter performing the Violin Concerto no. 2 “Metamorphosen” by Krzysztof Penderecki. Dedicated to and premiered by her in 1995, Mutter has continued to champion the work. […] Mutter knows this score inside out. Every note was under her fingers. It was clear that this was the most authoritative performance of the work that you are ever likely to hear, written as it is very much with Mutter’s style and technique in mind.”